Hanif Kureishi CBE FKC (Philosophy, 1977) is one of Britain’s foremost playwrights, screenwriters and novelists. Born in Bromley, South London, to an English mother and a Pakistani father, much of his creative work draws on his own upbringing and life. He had his first literary success while still a student at King’s, going on to make waves as a playwright, writing for Hampstead Theatre, the Soho Poly Theatre and the Royal Court. His major breakthrough came in 1985 with his screenplay for My Beautiful Laundrette, for which he was nominated for an Academy Award.

InTouch Online speaks to Hanif about his time at King’s, including the surprising route he took.

‘I was expelled from a different university, and my dad was very annoyed. His father and his before him had been to King’s to study medicine (and then returned to India), so my dad told me to go up to King’s, where I went to see Professor [Peter] Winch, who was running the Philosophy Department. In fact, my dad was so persistent that he forced me to go and see Professor Winch twice, to ask that I be allowed to join the Philosophy Department, despite having a very poor academic record and having already been thrown out of another university.’

The persistence paid off and Hanif was granted a place, joining a course quite unlike the one he expected.

‘It was a very interesting department because it was mostly older people, from all over. It wasn’t the usual 20-year-old, white middle-class kids that you tended to get in universities [then]. It was a disparate, strange group of incredibly interesting people. It was as though he [Professor Winch] had just picked people he thought were promising, regardless of A-levels.’

The 1970s were an exciting time to be in London. Hanif was getting involved in theatre, and he was also part of the punk scene, frequenting Malcolm McLaren and Vivienne Westwood’s now legendary shop on the King’s Road. Full of art, fashion and music, the shop was the centre of the punk scene and the place to go in London.

It wasn’t the usual twenty-year-old, white middle-class kids that you tended to get in universities [then]. It was a disparate, strange group of incredibly interesting people. It was as though he [Professor Winch] had just picked people he thought were promising, regardless of A-levels. 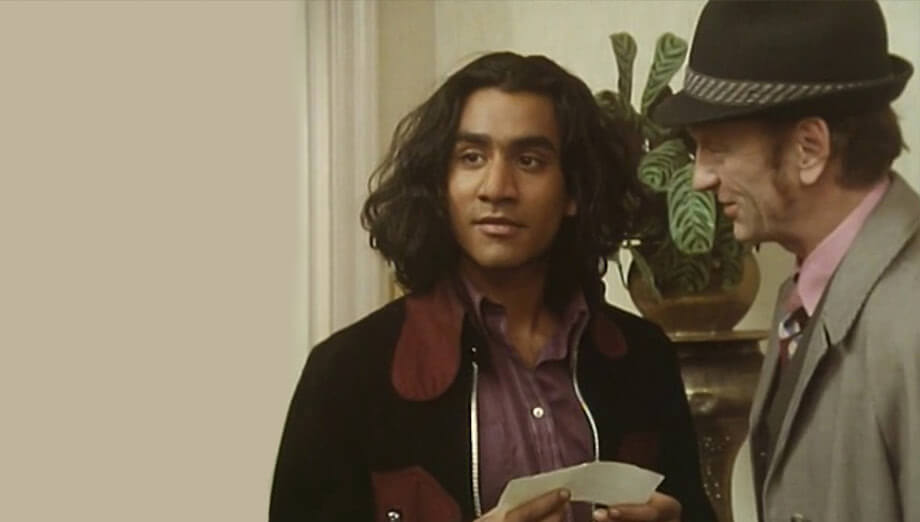 A still from The Buddha of Suburbia

‘I wanted to go to King’s as it was right in the middle of London, and I wanted to be able to keep up with my normal activities while studying. It was a great period to be in London, and I was enjoying reading philosophy and getting to meet so many interesting people – I felt really alive, and very stimulated by it all.’

Spending time at lectures, reading in the many libraries in London, going to the theatre, and watching bands like The Clash playing not far from the Strand meant that he also underwent a cultural education of sorts.

‘It was the period in a writer’s life when you haven’t yet decided what you’re going to write about. You haven’t found your voice yet. I was writing a lot, but it took a while for me to get anywhere.’

Graduating in 1977, Hanif spent time working for notorious actor Steven Berkoff – an experience he describes as ‘terrifying’: ‘He’s quite a tough guy, but it was a very interesting job. We toured around the country in a van doing Kafka’s Metamorphosis and it was really good fun. He gave me a break – I started to earn some money, meet a lot of actors, and got involved in the world I really wanted to be part of.’

Within the next few years, Hanif had plays on at the Royal Court, Soho Poly and the Hampstead Theatre. In 1985, his screenplay, and perhaps his most famous work, My Beautiful Launderette, hit cinemas across the world. Set during the early Thatcher years in London, the story is about Omar, a young British Pakistani man, and his friendship and eventual romance with Johnny, a skinhead who he went to school with. The film wowed audiences and earned Hanif an Academy Award nomination for Best Screenplay. An instant classic, it has since been named as one of the British Film Institute’s Top 100 British Films.

Hanif has gone on to worldwide success as a playwright, screenwriter and novelist.

It was the period in a writer’s life when you haven’t yet decided what you’re going to write about. You haven’t found your voice yet. I was writing a lot, but it took a while for me to get anywhere.

‘I did My Beautiful Laundrette as a screenplay because I’d been asked to write a film, but I had a lot of material left – it was too much to be a movie and I’d always wanted to write a novel, something that was entirely my own work – no actors, no director, just me and the reader. So, it became The Buddha of Suburbia.’

The novel tells the story of Karim, a mixed-race teenager desperate to escape the suburbs and start living his life in London. It won the Whitbread Award for the Best First Novel and was adapted into a TV series of the same name with a soundtrack by David Bowie.

Reflecting on the career he has had, Hanif shares: ‘It’s amazing to me that an uneducated, mixed-race boy from the suburbs could make a living as a professional writer. In the mid-70s, there were no, or barely any, writers of colour who were notable in the UK. They were all posh, all white and mostly public school [educated]. It never occurred to me that I could live my whole life as a professional writer and support my family (with some ups and downs along the way) – which I have been able to do. I’m grateful.’

Hanif’s most recent play, The Spank, which explores the friendship between two middle-aged men, premiered at Teatro Stabile di Torino in Italy this May (a planned run in London was cancelled due to the pandemic). Keep your eye on Twitter (@Hanifkureishi) for updates on where to find Hanif’s books, upcoming shows, and screenings.