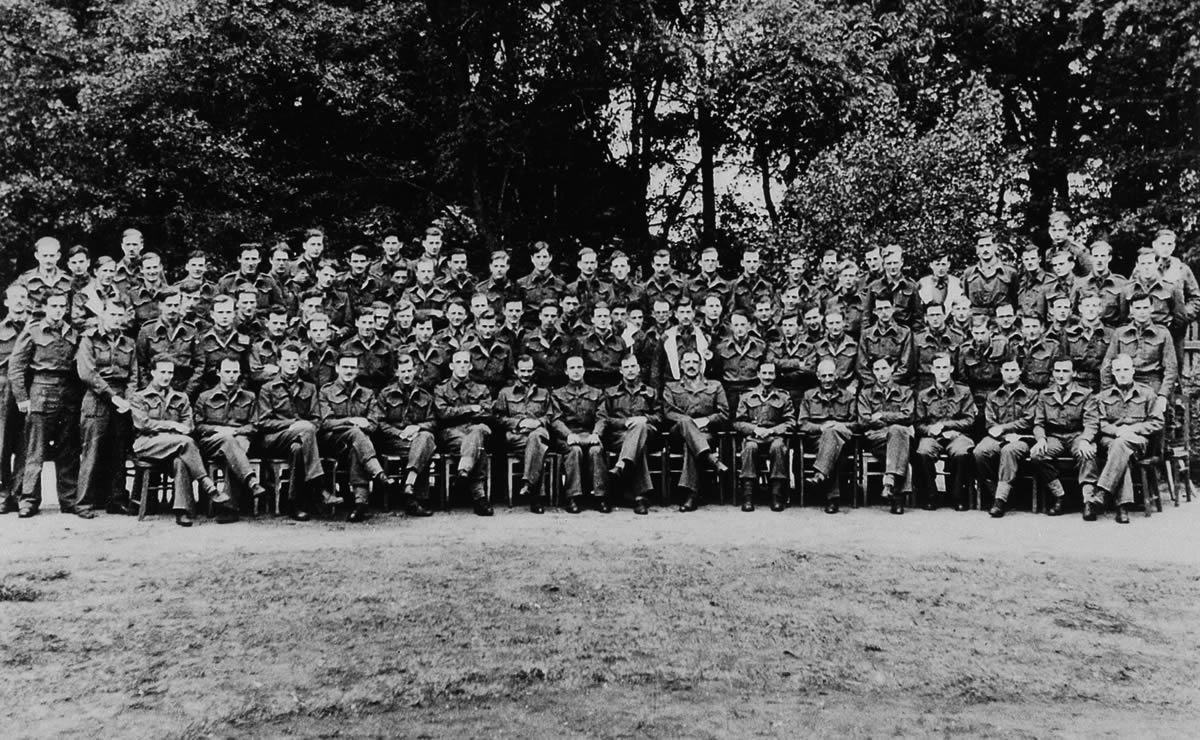 Group photo of London medical students who went to Bergen-Belsen

In April 1945, the British Army liberated Bergen-Belsen concentration camp. Just weeks later, a convoy of 96 medical students from Guy’s, King’s, St Thomas’ (GKT), and other medical schools arrived to assist in the recovery effort, saving thousands of lives in the process.

When the British Army arrived at Bergen-Belsen in 1945, they were confronted with horrors that defied imagination. They found approximately 43,000 men, women and children huddled in huts, starving and sick with typhus and other ailments, reduced to barely human as a result of the suffering and starvation they had endured. Beyond the huts lay the bodies of over 10,000 people, some in open mass graves, but most lying outside the huts. It is estimated that 50,000 died at Bergen-Belsen before liberation, with a further 13,000 dying afterwards as a result of the horrendous situation they had endured.

In April 1945, the British Army liberated Bergen-Belsen concentration camp. Just weeks later, a convoy of 96 medical students from Guy’s, King’s, St Thomas’ (GKT), and other medical schools arrived to assist in the recovery effort, saving thousands of lives in the process. Some of the students documented their experiences in their medical school’s gazette:

Although it was the fourth concentration camp to be liberated, with 43,000 survivors (two thirds of whom were women), the situation at Bergen-Belsen displayed a level of human suffering that was difficult to comprehend. BBC journalist Richard Dimbleby visited the camp shortly after liberation. When he filed his report, the BBC initially refused to broadcast it, finding his descriptions too horrific to be true. Determined that people should know what had occurred in the camp, Dimbleby staked his career on it and threatened to resign unless the broadcast went ahead, which it did.

Listen to the broadcast

The British Army began the work of trying to feed the survivors, but it was clear that medical assistance was needed, especially as the war continued around them. That help came in the form of 34 medical students from Guy’s, King’s, and St Thomas’, alongside students from other London medical schools. The students had responded to the Red Cross call for volunteers to assist in feeding Dutch refugees recently liberated from German occupation; however, at the last minute, they were diverted to Bergen-Belsen. The information they received on what to expect was scant, and little could have prepared these young men for what they were about to experience.

Arriving a fortnight after liberation, they set to work immediately. Each student was given responsibility for a hut housing 200–600 people. With little in the way of medical supplies or assistance, the students worked tirelessly to bring the survivors back to health. However, due to the devastating conditions the survivors were living in, they continued to die at a rate of around 500 a day. 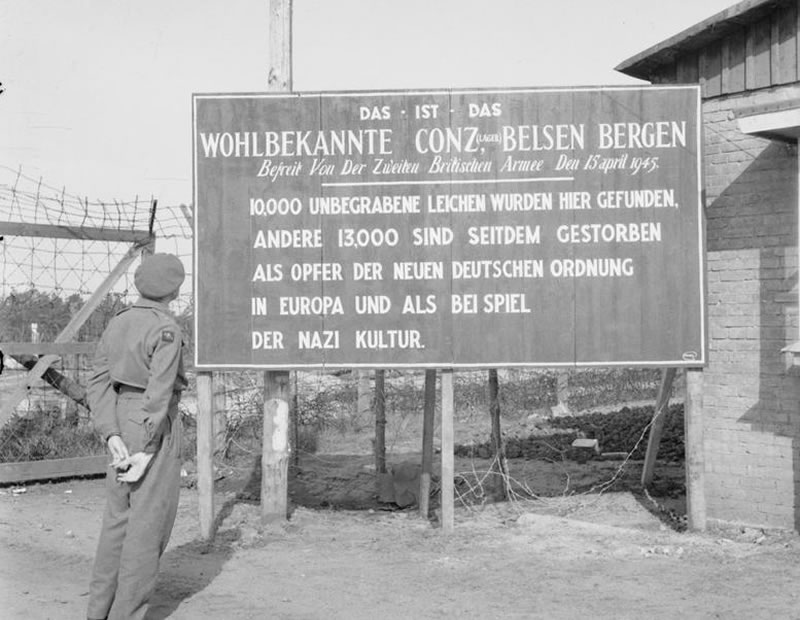 A sign erected by British Forces at the entrance to Bergen-Belsen concentration camp, Germany, 29 May 1945

The students shared their experiences in letters to their families.

‘Belsen is a place beyond all imagination. It was originated for death by slow starvation. One’s first job is to find the dead and get them removed. Our job is keeping alive those in the huts until they can be got to the hospitals.’

‘Inside the huts lay people in all stages of disease. Many were dead. Practically all were emaciated, many having starvation oedema… Sanitary arrangements were practically absent and nearly all the internees had violent colic and diarrhoea… the state of the huts may be imagined… Work in Camp 1 preceded apace… The death rate… dropped fairly quickly… this was mainly due to organisation of feeding arrangements.’

‘Scenes of indescribable horror, filth, squalor and disease… they have been dying of starvation and typhus at about the rate of 500–600 a day… I have in my hut 300 patients. It is the size of a stable – about 100 are very ill but able to walk or crawl. 200 are lying huddled, next to the dead… I am very tired. We work a very hard 12-hour day. The scenes I have seen here will be vivid memories for the rest of my life.’

What the GKT students experienced is not a widely known story, something which Professor Stephen Challacombe, FKC FMedSci DSc PhD (Dentistry, 1968) is keen to rectify. He is currently working on a book covering the history of the GKT students and, last year, hosted a sold-out event sharing the story. It was a topic suggested to him by Stanley Davis, a fellow member of the Guy’s John Fry Alumni Association, and they began to delve into the topic. 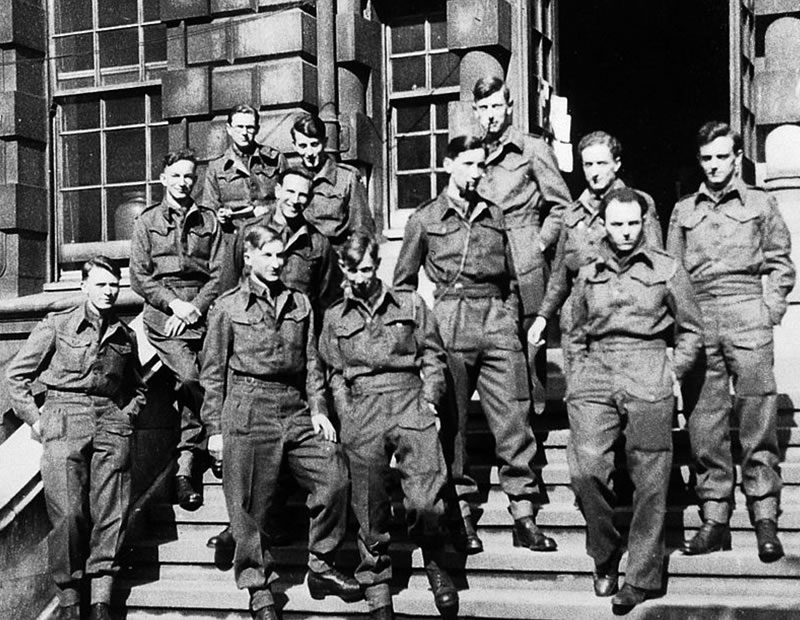 ‘I couldn’t believe that I hadn’t heard the story of these students
before, and that they didn’t have a more prominent place of recognition in Guy’s, King’s and St Thomas’.’

Realising the magnitude of the job at hand, Professor Challacombe’s research has progressed at pace. He says, ‘I found that the students had kept incredibly detailed accounts of what they encountered, initially in their respective hospital gazettes.’

And, as time has gone on, Professor Challacombe has met with
family members of the students and has been able to piece together what happened to them once they returned, forever changed by the experiences they had in Bergen-Belsen. Professor Challacombe tells us, ‘Most of them flew back on a weekend, handed back their uniforms and some of them were back in lectures on Monday. But others returned with typhus, and some with tuberculosis, meaning that their studies were delayed until they had returned to health.’ 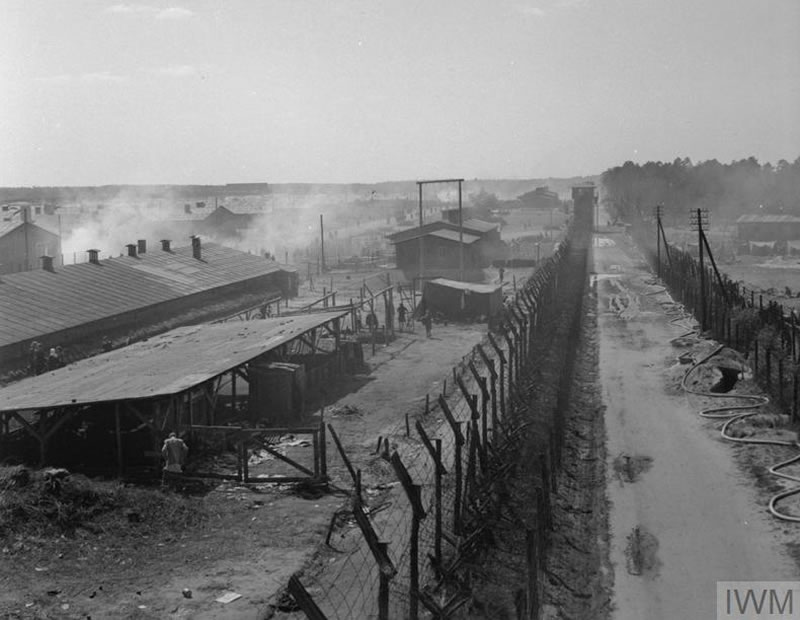 I found that the students had kept incredibly detailed accounts of what they encountered, initially in their respective hospital gazettes.

The 34 GKT medical students all stayed in medicine, going on to make significant impacts in their fields. Professor Challacombe shares, ‘The achievements are too many to list – but, for example, the first Breast Unit in the country was started at Guy’s by John Hayward, one of the students. Though even his colleagues had no idea of his history. I think it’s important for us to know that this group went on to make the most outstanding contributions.’

List of GKT medical students who assisted at Bergen-Belsen: 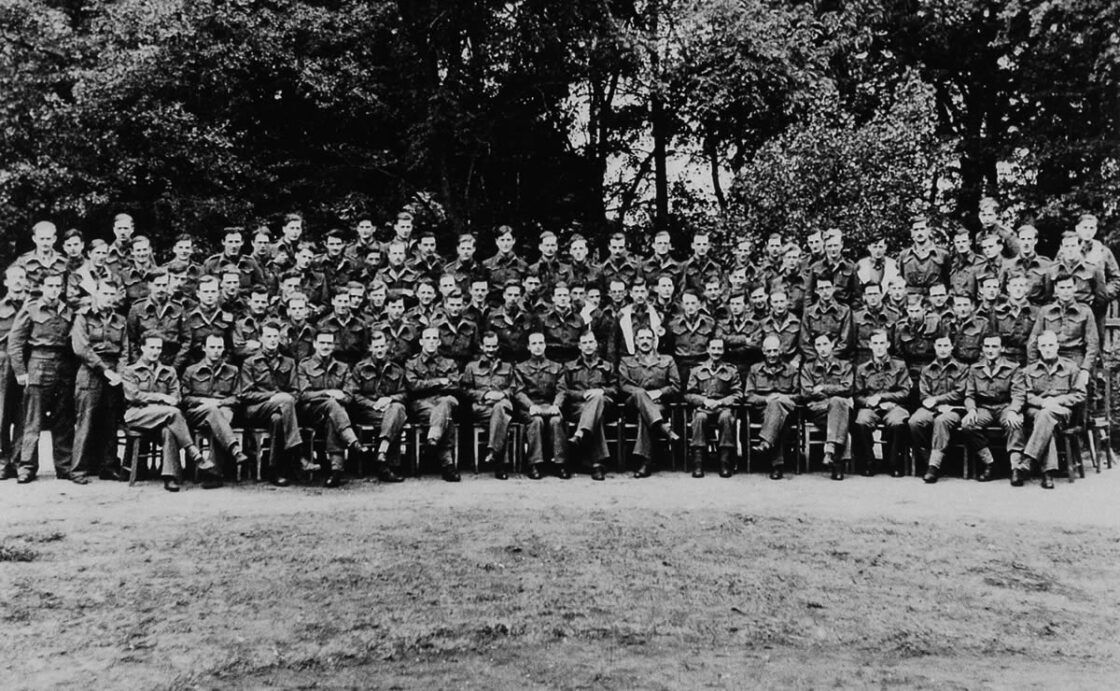 Group photo of London medical students who went to Bergen-Belsen.

Overview of Camp No 1, now substantially evacuated, taken from a watch tower used by the German guards. © IWM BU 4711

A sign erected by British Forces at the entrance to Bergen-Belsen concentration camp, Germany, 29 May 1945. © IWM BU 6956 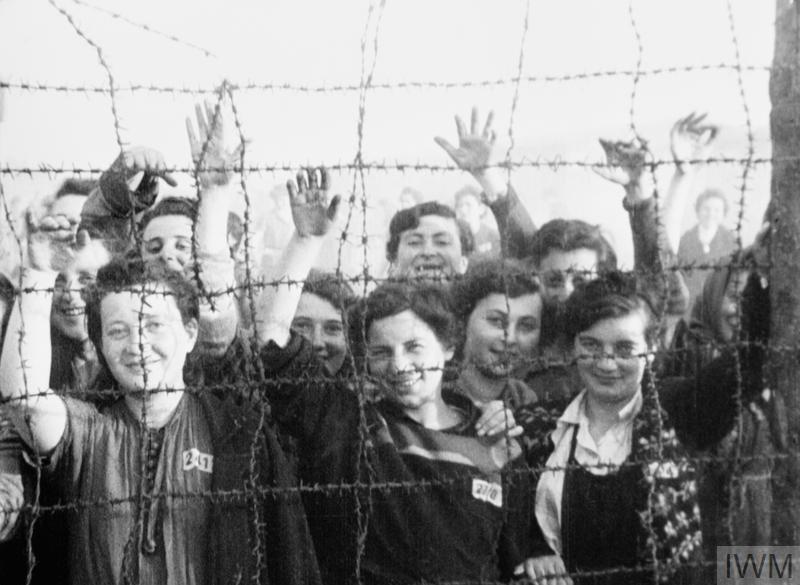 Women inmates of the German concentration camp at Bergen-Belsen wave through the wire to liberating British soldiers (including the cameraman Mike Lewis). The group includes Mania Salinger, the central figure in the group closest to the wire. © IWM IWM FLM 3762 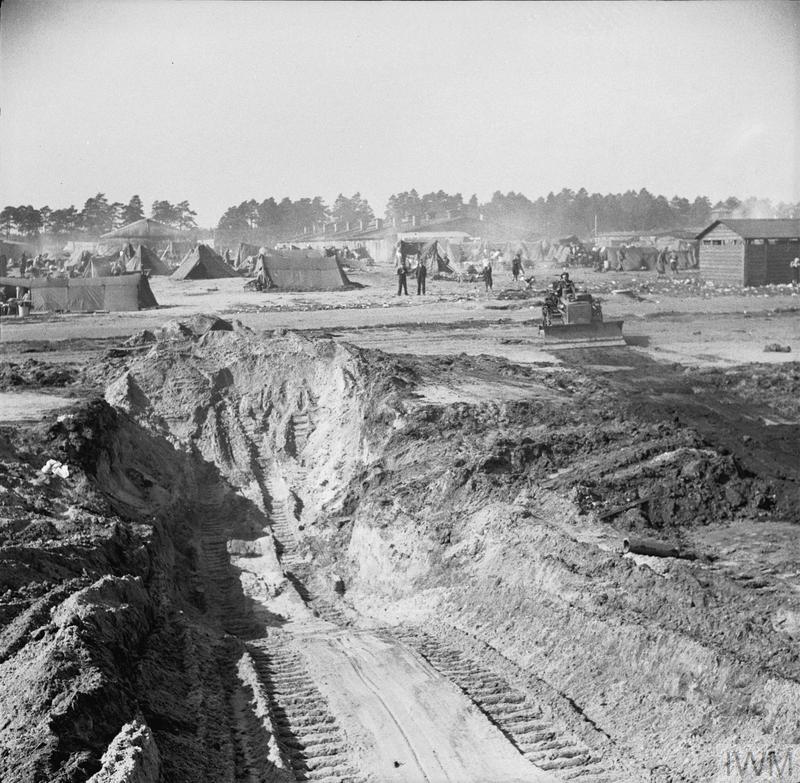 A partially excavated mass grave in the camp. In the background, tents provide emergency accommodation while a British Army bulldozer waits to recommence work. © IWM BU 4056 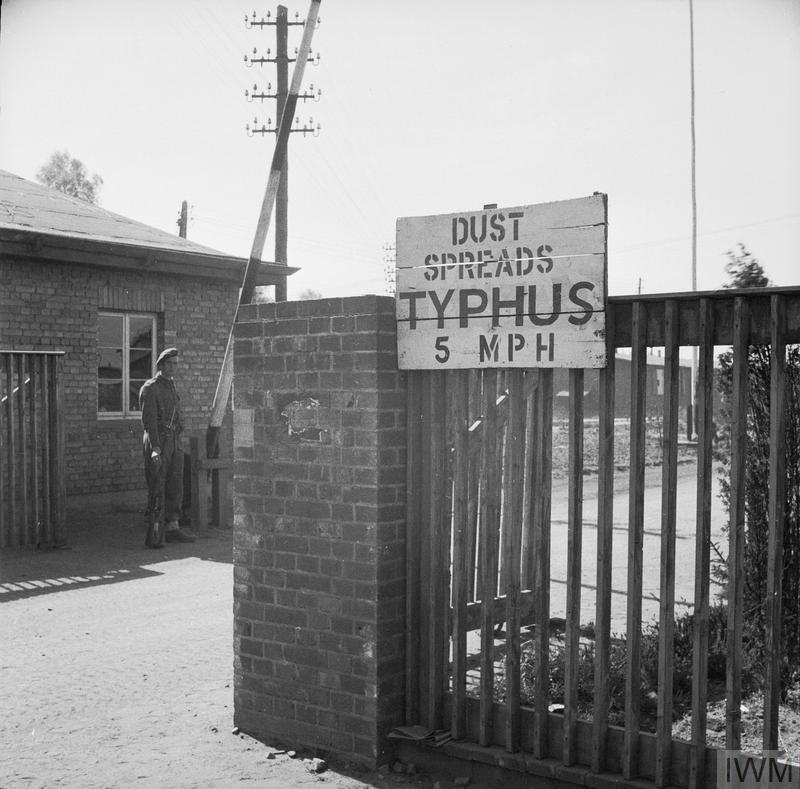 A sign at the entrance to Belsen reading "Dust spreads typhus - 5 mph". This speed restriction was imposed to prevent the spread of dust carrying the lice which were infested with typhus. © IWM BU 4092 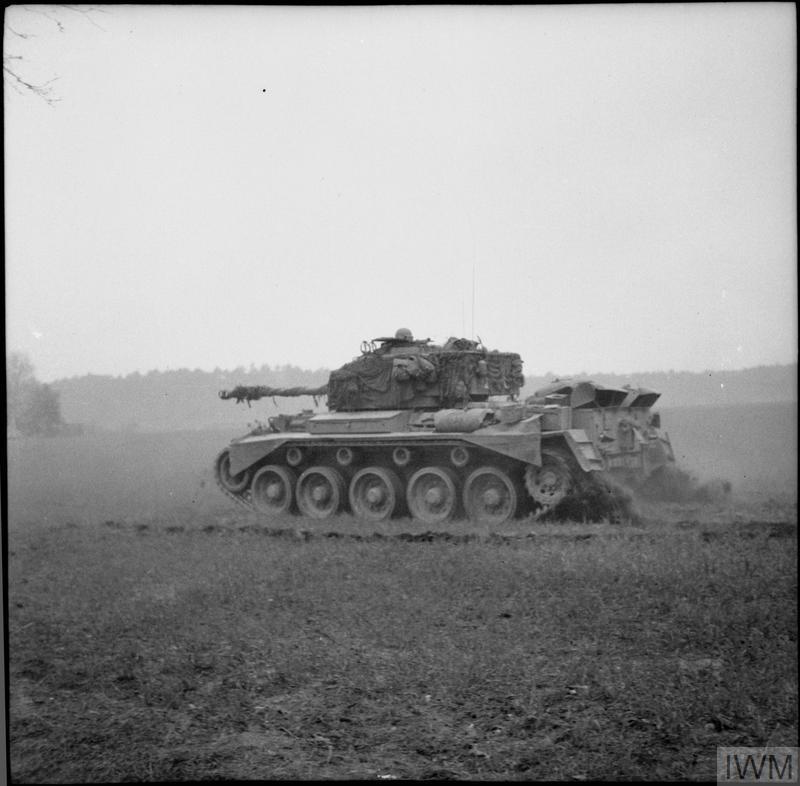