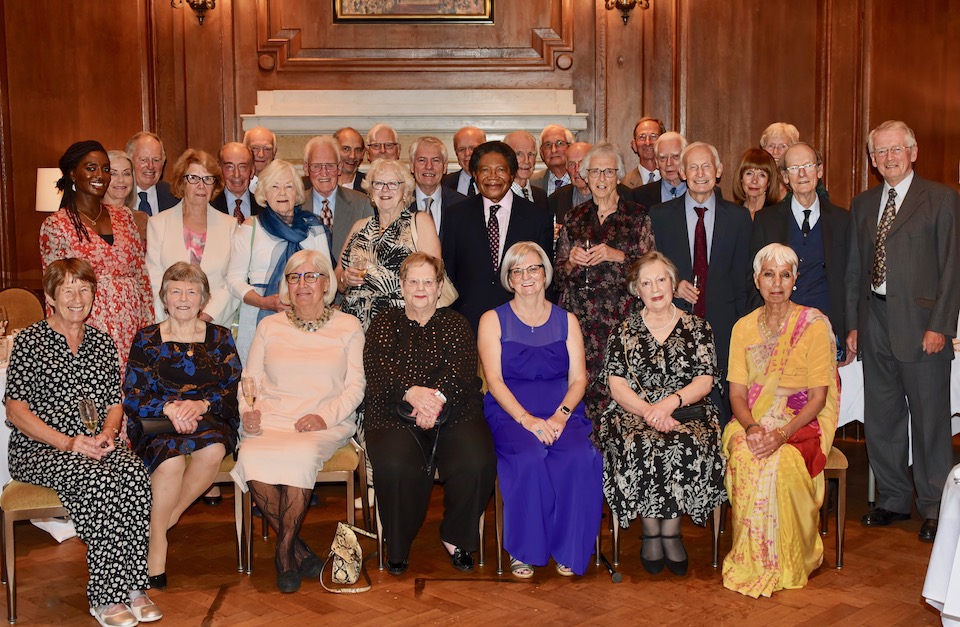 A valiant reunion for Guy’s ’66

In September 2021, a formidable group of 32 attendees – comprising alumni and their partners – from Guy’s Hospital Medical School class of 1966 met for a reunion in St Thomas’ Hospital.

Initially, the event was due to take place close to Guy’s, but persistent COVID-19 restrictions brought limitations. Instead, a reception was held at St Thomas’. In 1966, this would have been unthinkable, because both hospitals were separate; instead, a friendly rivalry (except on the rugby field) in sport and academia ensued.

The careers of those participating in the reunion followed many paths, some within the NHS and UK universities, with others giving service abroad – which is a wonderful testimony to the broad education offered at Guy’s. An equal number of contemporaries sent apologies and good wishes. The engagement allowed safe mingling and an opportunity to refresh memories of names and events. Alumni were provided with a sumptuous buffet in the balloon-decorated dining room, where a stream of unsolicited and faintly heard ’60s melodies added a sense of occasion.

Many chose to take a boat from Westminster to Greenwich on the following day. Others pursued one of the many leisure or cultural possibilities offered in London. In the evening, the group reassembled for dinner in the King George V Room of the London Marriott Hotel in Westminster, where many alumni were staying. Once again, the group enjoyed gourmet food at a formal meal. There were humorous speeches, which dwelt on the group’s time as preclinical students and the idiosyncrasies of today. Finally, a plea was made for advancing the next reunion, for which there was enthusiastic support.

The previous reunion of this cohort was in 2016, to celebrate the 50th year of qualification. It appeared in InTouch’s 2016 autumn issue. The next instalment of this saga may be in 2024 rather than 2026, but with ageing come many uncertainties, so we shall see.